What is the FSLGRA? (French as a Second Language Global Read Aloud)

September 22, 2019
Welcome to the site for the FSL Global Read Aloud!

We started the #FSLGRA project just before the 2018-2019 school year. Inspired by the collaborative nature, the meaningful connections to and within the real world, and the deep learning experience offered by the annual endeavour created, owned and maintained by Pernille Ripp in the United States for several years now (the Global Read Aloud aka le GRA), dedicated and risk-taking FSL teachers wanted to offer a similar literary experience for our young language learners. So we apprached Ms Ripp with our idea and were granted permission to try to organise something similar, specifically with second language French audiences in mind. She gave us her blessing (in accordance with certain conditions that we have followed and will continue to respect).


Here's how it happened ... In 2016, I had the pleasure of teaching English Language Arts (what we just call "Language" here in the English language public school boards in Ontario, Canada) to my own home room class within the framework of a French Immersion program. This is not often possible, due to a serious shortage of capable and willing FSL teachers in Canada overall. In fact, it's the first and only time that has happened to me in over a decade with this one school board. My students really enjoyed this adventure, with the chance to simply listen to a beautiful story and also to share their thoughts, predictions, related drawings and questions with the world through social media (teacher-directed, not their own accounts). For me as a career French teacher, I really became quite jealous who are teaching in the language of the dominant culture because in all my experience, since the late 1990's, I've never seen this level of enthusiam and excitement in any group of students around anything to do with reading in French.

There already was another francophone version, called Projet ELM (short for écouter lire le monde) but I am not sure if it continues to happen annually or not. That is one reason that I decided to try to put together something different than what was already happening, specifically for teachers & students of French as a second or additional language. Another reason was that I just had not seen anywhere near the same level of collaboration, communication and sharing in the francophone version as I'd witnessed first hand in the #GRA (original English version). Third reason: despite my best efforts to participe in the French version based in Québec, the books selected in the years that I tried to join in were consistently way too long and complicated for even a small group of my strongest students (some of whom had just transferred from a francophone board) to handle in a period of less than a quarter of the school year. While teachers can decide for themselves, and they can certainly prolong the activities or use them on their own at a completely different time of the year, the GRA isn't really intended to last much longer than six weeks.

You can access the free resources and the list of books (both those nominated by anyone who wanted to put forth a title and then short listed, as well as the actual books used for the first #FSLGRA, via Twitter, in our facebook group, and using the links below. Admittedly, we had a lot more success in the middle two groupings than we did for the youngest and oldest/most mature groups. For our first time though, we are pretty happy with the results we achieved! In the shared document (Google Sheet) with the suggestions and resource ideas connected to the books, Here are the two "model" tabs to check out.

Please don't be too disappointed with the first (mostly blank) page and turn away - instead, we strongly recommend that you check out the specific Twitter hashtag for that level (#FSLGRAprimaire) for a better idea of what really happened in primary & Early French classes with these books as they were read aloud and discussed.

Popular posts from this blog 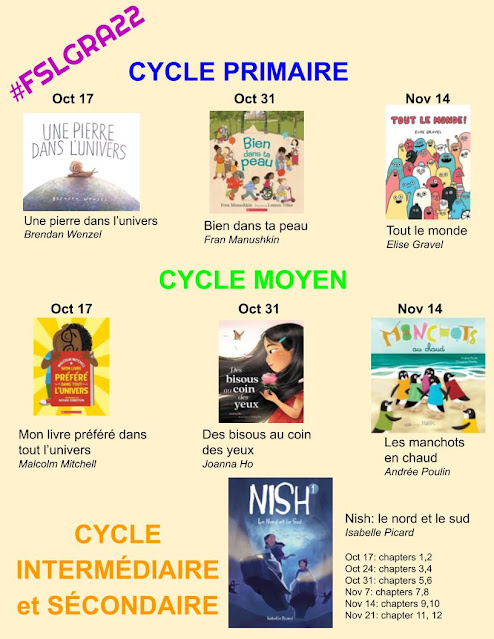 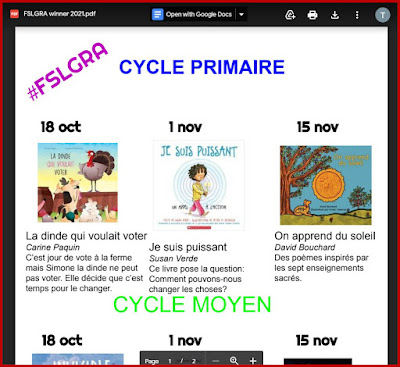